Get To Know: Sukhi Gill, VP and CTO, UKIIMEA at DXC Technology

We caught up with Sukhi Gill, VP and CTO, UKIIMEA at DXC Technology, to find out what makes him tick…

I’ve been most proud of the times I’ve built and implemented a system that has gone into production. If you file a tax return in the UK, for instance, some of my code may still be in the background, because I was the Chief Architect of the tax returns capture when the system was initially built. Similarly, in the US Navy, there is a system called NMCI which was, at the time, the largest intranet ever built, with over 800,000 users, of which I was also a Chief Engineer and of which I’m immensely proud. Being made Fellow at EDS, HP, HPE and now in DXC is also a huge honour.

I stumbled into computer science when studying for my A-Levels. This led to my parents purchasing a BBC ‘B’ computer – which got me hooked on to computers and led me on to my path into the IT world. I studied computer science from A-Levels to degree level and, in addition, I completed Open University and college certifications in computer programming – such as in Unix, Visual Basic and C++.

I see myself as a big picture visionary with a bias towards executing small and delivering on what the client needs. My approach is to facilitate teams around me by experimenting with new and emerging technologies, with a bias to focus on solving business challenges.

What do you think will emerge as the technology trend of 2020 and why?

The biggest technology trend this year is home/remote working and the implications on collaboration. We’ve all had to adapt to how and where we work due to COVID-19, and it’s not just this year that will be affected, it’s going to be a huge trend for the future too. Every conference I was planning to attend has either been cancelled or had to go virtual, and post lockdown I am not sure I want to physically attend another conference. The leaders will drive new collaborative ways of working with colleagues and clients.

Analytics and AI is a major area of investment. A data-driven approach is key to almost every problem analysis and so enterprises are gearing up on data strategy, data engineering and analytics. Machine Learning in AI is still a small part of the challenge as there is much work to democratise and progress the data locked behind the existing legacy systems. Another key ongoing area of investment is Automation. There are still too many people doing mundane tasks that can be automated.

My advice is to have a life outside of work! I spend a lot of time reading about ethics and AI. This is a big personal interest of mine and something I’ve also been trying to understand by attending lectures as well as CognitionX events for the last two years. I also love to climb mountains, and I’m in the process of trying to climb the highest peaks around the world – though I’m omitting Everest. Obviously, that’s on hold at the moment but I’m still preparing for the next climb, whether through meditating, cycling or other exercises.

I would like to have worked in more industry verticals, such as healthcare or finance. I’ve worked extensively in the public and defence sectors, but I think it’d be fascinating to see how other industries operate so I can better understand how to help them.

Regulatory compliance is still a key challenge when implementing new technologies. Recently, we swiftly implemented a COVID-19 Employee Welfare App in record time out to the field, but the rollout had to be paced in line with privacy approvals and works council engagements in each country.

As a CTO, I have to show leadership by example and fully embrace a data-driven approach to everything we do, which has been the biggest change. I am excited by new technology but absence quantification of the ‘size of the prize’ in solving a specific business problem, I push back to the idea originator. The market is changing rapidly and understanding where to play and how to differentiate has never been more important based on regular data from market analysis, customer engagements and the maturity of technology.

What advice would you offer somebody aspiring to obtain C-level position in your industry?

I think aspiring CTOs will need to become a ‘Babel fish’ that stays close to the reality on the ground – i.e. the ability to speak both in the language of business process and technology implementation, have head in the clouds but feet on the ground. I also think that strategies are going to become more short-term, with those five to 10-year plans of old becoming increasingly unrealistic. 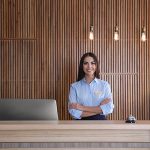