Given the disruption IoT initiatives can cause when they are introduced it’s vital that CIOs push for involvement in their business’ IoT strategies from the start. Subbu Iyer, CMO, Riverbed Technology, offers three key considerations for CIOs pursuing IoT initiatives.

For instance, a manufacturer may add IoT sensors to their products so they can receive data on their performance, assess issues and plan for improvements. However, when first pushed into production, IoT initiatives create undeniable waves in the digital enterprise; from increasing the complexity of IT infrastructure to affecting integrations with other enterprise systems.

CIOs and their teams are likely to be responsible for implementing the aforementioned technologies, as well as assuming operational responsibilities over the new systems. However, concerningly, 59% of IoT strategies are planned without the direct involvement of IT or IT is involved after the crucial decisions have been made, according to Gartner.

For IoT projects to be successful, IT must place themselves back in the conversation. Partnering with other stakeholders to understand what other initiatives are planned and establishing whether the underlying IT infrastructure will be capable of supporting IoT is a crucial part of this process.

With this in mind, here are three key considerations for CIOs pursuing IoT initiatives.

Many unsuccessful IoT initiatives are characterised by their failure to consider how the projects will change the requirements for Wide-Area Networks (WANs).

According to Gartner, there will be 20 billion Internet connected objects by 2020. This influx of devices and sensors will significantly increase network traffic and unused to the volume of activity, traditional Multiprotocol Label Switching (MPLS) links will become congested. This will result in a decline in application performance triggering a whole host of problems, including reduced productivity and loss of revenue.

In an attempt to overcome such capacity limitations, many companies will turn to alternate connectivity options, for example cellular LTE or broadband Internet. However, the routers and patchwork of tools required for this process will create an unnecessarily complex hybrid network when combined with the volume and diversification of IoT devices.

Software-Defined WAN (SD-WAN) circumvents this complexity. Unlike traditional infrastructure, SD-WAN will automatically direct traffic through the most efficient route available, regardless of connectivity type, to ensure the seamless connectivity required for a successful IoT deployment.

Ultimately, this simplified, intelligent and flexible approach to network management means IT administrators can quickly deploy new services, policies and even entirely new sites, through a centralised management console. As well as being capable of addressing evolving needs.

The cloud is a key facilitator of digital strategies. Particularly when it comes to business intelligence, archiving and centralising access. However, for data-rich applications, or in scenarios where employees need to turn data into actionable insights as it’s created, Edge Computing is far more suitable due to its lower latency.

Let’s take the IoT system on a manufacturing floor as an example. The system may have been designed so that the production line will shut down automatically in response to the sensors indicating that a quality threshold is being exceeded.

However, if latency causes a delay in the relevant information being conveyed from the sensors, faulty units will continue to be produced, ultimately increasing downtime and overall costs. The manufacturer needs more computing power at their remote sites to support real-time data processing to prevent this from happening.

Resolving the issue through traditional infrastructure would be highly costly and complex to manage, but with Edge it’s a different story. Edge Computing offers a lean, powerful infrastructure for ingesting, processing and analysing millions of relevant data points, where they’re created in real-time. Minimising the time and cost of directing IoT traffic to the cloud.

In 2018, 26% of business breaches were caused by unsecured IoT devices or applications, according to the Ponemon Institute. This was almost double the percentage reported in 2017. This rise is thanks to the increase in the number of IoT devices in use, lack of stringent security measures and the fact that all the devices are connected, providing hackers with numerous roads into networks and data.

Furthermore, for the data produced to be instantly actionable, it may be temporarily stored outside the secure confines of a cloud or data centre increasing the chance of exfiltration or loss. If this occurs, it could seriously damage the company’s reputation and as a result, customer acquisition and retention.

Combining SD-WAN and Edge Computing helps overcome these issues. Firstly, SD-WAN enables you to set network rules that segment IoT assets away from other apps, devices and systems, such as payment, with just a couple of clicks. This makes it easier to control access, limiting the scope of attacks. It also decreases the chance of a security event happening as a result of an operator error.

Secondly, Edge architecture limits the active data outside of the secure data store by only holding active data at the IoT edge. This means the smallest possible percentage of data is vulnerable for the smallest possible amount of time. Meanwhile, complete copies are constantly updated to a secure location. This has the additional benefit that frequent backups will give companies more recovery points if the IoT service faces an outage.

Given the disruption IoT initiatives can cause when first introduced – from increased complexity and  latency to security challenges – it’s vital that CIOs, who have a greater understanding of the potential pitfalls, push for involvement in their business’ IoT strategies from the start.

If they don’t emphasise upon the other stakeholders the importance of investing in the intelligent, modernised infrastructure required to support their initiatives, such as SD-WAN, their company’s efforts to embrace IoT and reap the associated benefits will not be as successful. As such, it’s clear that it’s time IT was put back in the IoT conversation. 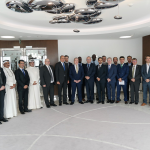