One of the most important learning centres in the Middle East, American University of Sharjah (AUS) was seeing an explosion of Wi-Fi users and devices accessing its wireless network. However their existing infrastructure, based on a variety of conventional Wi-Fi technologies, was struggling to keep up with growing capacity, coverage and performance demands.

Founded in 1997 by His Highness Sheikh Dr. Sultan Bin Mohammed Al Qassimi, Member of the UAE Supreme Council and Ruler of Sharjah, American University of Sharjah is a leading educational institution in the Arabian Gulf region with over 6,000 students and staff and a campus spanning more than 200 acres. AUS has a multicultural campus with a student body of over 6,000 students with a campus that covers over 200 acres with dozens of buildings including student dormitories, administrative offices, and lecture halls.

Previously, American University of Sharjah had only deployed Wi-Fi within selected administrative buildings. By early 2012 with the dramatic increase in the number of Wi-Fi enabled mobile devices, and a growing student community now armed with multiple smart mobile devices, the deployment of ubiquitous Wi-Fi across the campus became a necessity.

The legacy Wi-Fi network at AUS struggled to deliver reliable and ubiquitous signal coverage. Consequently AUS realised that to scale capacity, coverage and performance, it needed more advanced Wi-Fi technology that could provide carrier grade reliability under all conditions and in a myriad of high density environments such as lecture theatres, student accommodations, its sports complex and activity centre as well as in green spaces around campus where students and staff are highly mobile.

“A fast, reliable and ubiquitous Wi-Fi infrastructure has become a foundational utility for higher education environments around the world,” said Leo de Souza, IT Director at AUS. “Having a unified indoor/outdoor Wi-Fi infrastructure that delivers carrier-grade reliability and performance is imperative to supporting our teaching, learning, research and service mandates. However, we found very few solutions capable of delivering such quality of wireless service. The Ruckus solution was the one exception.” The IT Department at AUS initiated an exhaustive 18-month evaluation of Wi-Fi systems that included a real-world proof of concept trial. Seven technology vendors were invited to temporarily install their proposed solution at the university for 3 to 4 weeks in a ‘real life’ environment.

For AUS IT administrators, the Ruckus system provided a range of different and purpose-built indoor access points from which to choose. This allowed AUS to select the best Ruckus access point for each area and application across the campus.

Finally, the Ruckus ZoneFlex system offered a unified and simple management framework that would allow AUS to easy update, change and tune the entire infrastructure from a singe point. Advanced features such as band balancing, band steering and automatic channel selection could be enabled in seconds across the entire network with a click of a mouse. Detailed Wi-Fi network statistics use could be quickly and easily viewed from a single dashboard and available to AUS IT staff to identify usage trends and troubleshoot potential problem areas.

Critical to a smooth deployment for such a large-scale Wi-Fi network was engaging with Fibre Optic Supplies & Services (FOSS), one of the leading network infrastructure solution providers in the region. FOSS was given critical deadlines for each accommodation block so that the students occupying the dormitories were not adversely affected. The Wi-Fi roll out involved running new cabling for the access points, site surveys as well performance and coverage testing and fine tuning of the Wi-Fi network to ensure optimal Wi-Fi performance everywhere. FOSS has now installed over 1,400 Ruckus indoor and outdoor Wi-Fi access points at AUS.

The roll out of the new wireless LAN was implemented in three phases. Phase one involved outfitting three large administrative buildings with Ruckus Smart Wi-Fi access points, The second phase involved installing the new wireless LAN into 2,200 student accommodation rooms. The final phase was to fill in the remainder of the campus to provide blanket coverage everywhere. Full rollout of the new Smart Wi-Fi infrastructure across the entire campus is expected to be completed by the end of 2015. 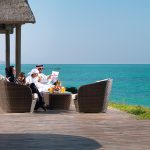 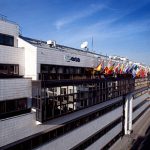