The show that is 35 years young

This year sees GITEX celebrate its 35th birthday. During those times the show has experienced huge growth and not only is it the largest technology show in the region but the fourth largest globally. Over the year’s I’ve heard many companies mention how GITEX doesn’t work for them, yet still we see the number of exhibitor’s increase year-on-year.

The Dubai World Trade Centre must take a lot of praise for how they have kep the show fresh, when in the past there have been muttering’s of discontent from important stake holders, the show organiser’s have shown their own true innovation in a show that leads the way in innovation. New show elements and niche areas have attracted key exhibitors and engaged show visitors meaning attendees are coming from a far to listen, interact and communicate with leading technology professionals.

This year the conference side of the show has expanded and attracts speakers from across the globe and from all backgrounds. As country sponsor of GITEX, Saudi Arabia will be showcasing many leading companies from the Kingdom on a World level.

Whatever your reason for coming to GITEX, I trust you will have an enjoyable week at the show, meet old friends and recollect some of the past technologies exhibited at the show over the past 35 years and maybe some of you maybe be tempted to dream of the technologies to come in the next 35 years. 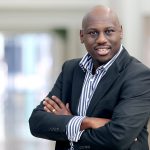