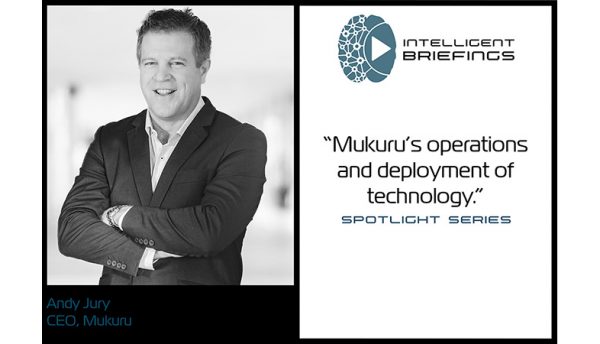 Mukuru is one of the largest remittance companies in Africa that brings safe and reliable financial services to underserved communities across the continent. Intelligent CIO discusses the company’s deployment of technology with its CEO Andy Jury.

Mukuru has been at the forefront of technology launching a multitude of cutting-edge initiatives designed to solve problems for the African migrant diaspora.
This year has seen it launch Mukuru Groceries – a service that is giving SADC based customers the ability to send groceries to their families and communities back home in Zimbabwe.
At a time when many families are struggling to obtain basic commodities, Mukuru Groceries will help support Zimbabwe’s large diaspora in their quest to send critical financial resources to families back home.
The company has also formed a partnership with WorldRemit, a leading global online money transfer service, to facilitate money transfers to Zimbabwe from across the globe. The partnership will be instrumental in bringing world-class financial services to Zimbabweans and generating new synergies for African financial inclusion.
The company, which has processed just under 50 million transactions, focuses on mobile technology and comprehensively caters for customers that have the most basic phones.
“On the one end of the customer engagement channels we make extensive use of USSD strings. It’s zero-rated so it’s free to the end-user,” said Jury.
“This has been complemented by other technologies as they have become available. We were one of the first users of the WhatsApp business channel in Africa, launched in early 2019, which is far simpler to use, there’s less spooling and timeout, and it’s a cleaner interface for multi-step transactions.”
The company makes use of .Mobi sites and apps that can be used on smartphones, it also utilises .Net, PHP, Android, HTML, javascript and Flutter among others, and has deployed AWS for hosting technology.
“The core engine of the transactional capabilities can work on one bar of edge in northern Malawi and we’ve tried to ensure that a customer journey can be enabled, regardless of the type of device that they have,” said Jury.

We asked Andy Jury, CEO of Mukuru, further questions about the company’s operations and deployment of technology.

Can you tell me about the company’s background?

There are large migratory patterns where people move across borders in search of economic opportunity – generally they congregate in big urban hubs, such as Johannesburg, Cape Town, Gaborone and Lusaka.

Many of them are financially underserved or underbanked, and the only ways that they could get their money home was either to stand in the queue with the traditional money transfer operators, get treated like a transaction, get charged high fees for the amounts that they wanted to send, or send it via informal channels that have high real and opportunity costs.
In Africa, there’s this massive informal remittance market where money goes home in buses, in coffee tins, hidden in socks and other clothing items. There’s a big opportunity cost, it’s fraught with risks, it’s unregulated – you’re dropping money off at a bus station and two weeks later, it might get to the destination, but it might not and the entire time there is a communication blackout.
Our initial focus was looking specifically at formalising that informal market and it has turned out to be a pretty large addressable market.
We have designed mobile-centric processes, where you can sign up and get treated like a customer and it works on a simple feature phone using USSD strings, if that’s the sort of device you have. You can send money by creating a transaction, paying for it or settling it at any one of our partners or our own branches, and the money is instantaneously available on the other side.
Your recipient receives a text message, they have to show ID to prove who they are and they get the money. A process that used to take weeks, where you could lose anywhere between 25% to 40% of your principal in fees, unforeseen charges, bus rides into town etc, is now instantaneous, thankfully through the use of mobile technology and the money gets to the other side immediately.
At the heart of it, our DNA is solving problems for the African migrant diaspora, and this is palpable when walking through our contact-centre, through which we are able to communicate with all customers in their vernacular: it sometimes sounds like the united nations of Africa.

How many countries are you operating in?

We service over 100 send-receive country corridors and those are where we have our own presence or direct relationships with partners. We send from five countries across Southern Africa and then the whole of Europe and we have our own operating presence to pay-out orders in 13 countries, but then we also bind into aggregators that enable you to send to/receive from 180 plus countries in the world.
How do you ensure the cybersecurity of the transactions that you process?

They’re all encrypted. The online payments are managed through 3D secure or similar platforms. We have to adhere to the FICA requirements that are stipulated to us by the South African Reserve Bank and other central banks in the territories in which we operate because we are an authorised dealer with limited authority. This means we need to uphold the KYC standards in our sign-up processes which are high in Southern Africa.
We’ve got to adhere to all the legislation and regulation around anti-money laundering, anti-terrorist financing, exchange control regulations and international watch-list screening, among others.
We trace patterns through technological flows. We trace patterns in terms of customer sets. And so, the transaction is looked at from the perspective of what it is and isn’t doing and then the actual technological capabilities follow fairly generic and standard security protocols.

What technologies are you looking to invest in?

Ensuring that the core stability and functional capability brought about by the technologies and coding languages mentioned earlier is of paramount importance. We are relaunching our app and that’s been built on the Flutter framework. The app is important because it allows for content rich customer engagements.
It will also enable us to ingest/scan customer documents in real-time, process card payments securely so that customers can create and pay for orders in one step as opposed to two, as well as allowing for a host of additional customer facing services and capabilities to be deployed.
The core DNA of our business is making sure that it’s super simple and that somebody with a feature phone is not precluded from using the service, because that is the essence of where our customer base is at, so we want modular technological capabilities that we can use in any conditions.
Biometrics is another sort of key differentiator in the space for increased security and ease of sign-up. Africa is ready for digitisation, and we have already seen good traction in SA with our Mukuru Card product. Mukuru is investing in technology to support customers as they digitise in the coming years, across our footprint.

What have been the major IT achievements of your organisation in the past 12 months?

I think there are three things. One being able to take the idea of enabling the groceries opportunity, and to get that from an idea to a functioning product within 90 days, it’s been nothing short of remarkable, just given how many things we have on the go – that’s been a key thing.
Increasing the use of WhatsApp as a transacting channel, which went from an absolute standing start in early 2019 to accounting for well over a quarter of all the ‘order create’ transactions we have.

And I think it has been a mammoth undertaking and a re-examining of how we do things to re-architect our app and make sure that we continue to move along with our customers and grow with them.

Those have been three key undertakings while ensuring that our core keeping-the-lights-on technology stack is able to sustain ever increasing volumes. On the two days before Christmas last year we were doing three transactions a second in peak periods, if we were thinking about that five years ago that would have been nigh on impossible for us to envisage. So, at the same time, making use of the AWS stacks that we can spin servers up and run them down when we don’t need to, and having that sort of dexterity in our DevOps team, has been critical for us.
Do you have any partners that you work with?

We have a whole range of partners through the value chain. We do have the benefit of having first-to-last mile capabilities ourselves. So, if you did want to, you could sign up at a Mukuru branch, you could pay for your transaction at a Mukuru branch or using our card, somebody could pick it up on the other side at a Mukuru booth for example. But our business has really been built with partnerships that we have with retailers, with payment aggregators, with card processers, with pay-out partners on the other side and depending on the territory, we work with physical logistics partners, cash-in and cash-out partners, and people who assist us in the technological chain where they are far better suited to provide the service than we can.

Can you mention who your partners are?

Through our partnerships we have over 300,000 pay-in and pay-out points across Africa. We’ve partnered with major banks in all the territories we operate in – if we don’t have a licence, particularly at the outset of a product or service offering, in the country, then we have to use an authorised dealer bank. We work with the big retailers in South Africa, that have been exceptional at making their branch infrastructure with their footprint available to digital services. So we work with all the big retailers in South Africa and similarly so in other territories, so companies like Shoprite, Pick n Pay,Boxer, Spar, PEP, Massmart, complemented by mobile wallets like mPesa – a range of key names.