When the Internet of Things (IoT) is used in DDoS attacks

The DDoS of Things is the weaponization of Internet of Things (IoT) devices to launch distributed denial of service (DDoS) attacks.

In this video, A10 Networks’ Don Shin discusses what’s different about the DDoS of Things compared to previous eras of DDoS attacks; how the Mirai malware ushered in this new type of threat; and why modern DDoS attacks are too large and geographically dispersed for legacy systems to adequately mitigate. 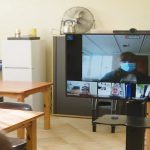