How to maximise success in your Digital Transformation project

Successful Digital Transformation depends on various contributing factors which include creating the right cultural conditions within your organisation and having the most efficient technology in place. Sarfraz Ali, Senior Director of Market Development at Smartsheet, discusses the key to achieving Digital Transformation.

Starting with the business vision, you must secure stakeholder buy-in and then leverage investment in the right tools to ensure the smooth planning, communication, implementation and completion of mission-critical Digital Transformation projects.

The pressure to digitally transform the business is greater than ever before, but these projects don’t always deliver the benefits to the business that were promised.

What’s going wrong? And what is the difference between those businesses that succeed and those that fail on the road to Digital Transformation? Key findings from a recent survey may help shed light on this:

We conducted online interviews with 622 senior business managers in three countries – the US, UK and Germany – and found a worrying disparity between the reported ‘success’ of Digital Transformation projects and their impact on the business. While the vast majority said that the project was a success against internal targets (88%), in the final analysis, only 49% could say that it had a significant impact on the business.

UK respondents had the least confidence in the tools and support they received when running projects compared to their peers from the US and Germany, with only 44% of UK respondents reporting that their projects ran to schedule compared to 61% of German respondents, indicating there is scope at least for the UK to improve its performance and possibly Germany and the US, too.

Nearly half of Digital Transformation projects are running late and in organisations where projects are struggling to stay on schedule, only 27% of respondents were confident that the project would have a powerful impact on the business.

Confidence is high at the beginning but begins to drop almost as soon as the rubber hits the road. While 71% of respondents said the project ran better than expected in the development and planning phase, once they hit phase two – sourcing suppliers – confidence plummeted to 22%.

Maintaining support from stakeholders over the lifetime of the project was identified as a key risk factor by respondents. Three out of four respondents (73%) said they enjoyed high levels of support at the beginning of a project but support at later stages fell to less than half (48%).

Project success hinges on access to good project management tools and yet despite the recognition of this, half of respondents lacked complete confidence in their solutions – and 5% indicated they had no confidence whatsoever.

Stakeholder support as a driver of success

One of the key results of the survey was the impact that stakeholder support had on the success of projects. Although there is a link between stakeholder support and project success, it is difficult to say with certainty whether support falls away in response to difficulties with the project or difficulties enter into the project workflow as a consequence of waning support from stakeholders, but a closer look at project implementation from start to finish may give us some insights into this question.

As we stated earlier, optimism and stakeholder support is generally high at the beginning of projects, with 71% saying their projects were running better than expected at the development phase, but this rapidly drops to 22% when it comes to sourcing suppliers. At the same time, the number of respondents that reported ‘issues’ with their project jumped from 28% to 76%. Not surprisingly, these delays have a knock-on effect on the next phases of the project – covering implementation, monitoring, completion, trialling and evaluation – from which few projects ever fully recover.

When projects get delayed, their business impact is significantly reduced. The survey found that 49% of projects had a significant impact on the business and 35% had an ‘incremental’ impact, but projects that ran without delay were more than twice as likely to have the strongest impact than those that suffered delays – 68% compared to 27%.

And this was closely linked to stakeholder support over time, as the figures revealed that 73% of respondents enjoyed full support for their project at the beginning, but it fell rapidly to 52% in the supplier sourcing phase and by the time it reached the implementation phase had fallen to 48%.

Overall, 40% of respondents complained that they lacked support, but splitting the figures geographically revealed that the UK suffered more (51%) compared to Germany (32%) and the US (37%). Interestingly, the UK also suffered higher rates of project delay (56%) than the average across the three countries (52%) and significantly higher than Germany (39%).

So why did stakeholder support decrease over time? Respondents pointed to lack of time (48%), other priorities (41%) and lack of shared vision (26%) as the most common reasons, suggesting the link between delays and stakeholders is very much one of stakeholders contributing to project delays.

What made some projects more successful than others? In a word, cooperation, as respondents who had enjoyed project success said that shared vision, business buy-in and communications were the most important factors in achieving their goals.

They enumerated five main barriers to transformation in business that have to be overcome to achieve success, with each roughly equal to the others (ranging from 37% to 40%):

In all of this, the role of technology in supporting communication and cooperation was key. Half of respondents (50%) were extremely confident that they had the best tools for the job, but this varied geographically, with Germany more confident (55%) than the US (50%) and the UK (46%).

Government and the healthcare sector were generally least confident that they had the best tools, at 35% and 43% respectively against a high of 59% in the telecoms and software sector and a score for all sectors of 50%.

Eight out of 10 businesses (81%) undertaking Digital Transformation projects have specialist software, with 63% using Microsoft Project and 24% using Smartsheet. But the percentage that used a single platform – recognised as a key indicator of success in managing complex projects and facilitating effective communications across multiple departments – was 39% compared to 35% that used a number of integrated solutions and 7% who used a specialist, standalone solution. The remaining 19% reported they had no specialist software to manage their project.

Those organisations that used a unified, single platform solution reported higher levels of success and satisfaction with their project outcomes than those that integrated a number of different software solutions to achieve their aims. Of those who used a single platform solution, 63% said their project was running better than expected in comparison to just 22% of those who were using integrated solutions.

Overall, everyone agrees that collaboration is important to achieving optimal outcomes, but this survey has shown that this is often more difficult than it looks. Success depends on creating the right cultural conditions within your organisation to ensure consistent stakeholder support and cross-departmental communications, aided by the adoption of the right technology to facilitate joint planning, resourcing, implementation, completion and evaluation of critically important Digital Transformation projects. 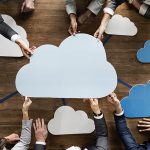 Getting down to business with data ethics in AI