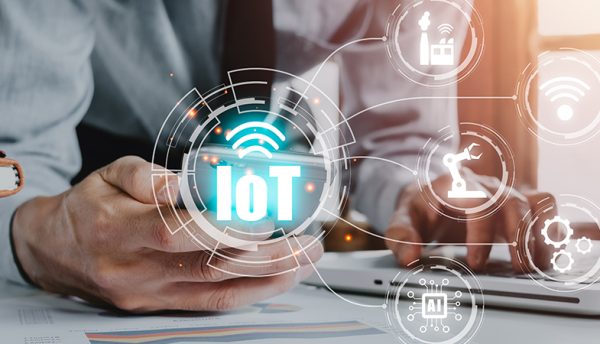 We take a look at IoT spending and how the International Data Corporation expects it to develop across Europe this year. We also explore findings from Wi-SUN Alliance, which recently reported that IoT security fears have fallen by over 30% in the last five years.

International Data Corporation’s (IDC) Worldwide Semiannual Internet of Things Spending Guide estimates that enterprises’ IoT spending will reach US$208 billion in 2022 in Europe and continue to experience double-digit growth through 2026. Despite facing many uncertainties due to the pandemic, inflation, low demand, supply chain disruption and geopolitical conflicts, IDC expects the European IoT market to continue to develop and expand, though at a slower pace than before the Russia-Ukraine War. This growth will continue in 2022 in various sectors such as manufacturing, retail, infrastructure and healthcare, where the need to maintain operations and improve performance is imperative.

In 2022, the largest share of spending is expected to be in the manufacturing and resources sector, driven by use cases related to predictive maintenance and production asset management solutions where IoT solutions are used to enhance manufacturing organisations’ remote tracking, monitoring and maintenance of industrial devices in the production value chain.

Steered by European organisations’ increased demand for video surveillance and security, IDC expects IoT solutions for video analytics, using AI and other advanced algorithms to recognise, detect and analyse live or stored video feeds in a number of uses including business analytics and security surveillance, to gain traction in the next couple of years in many industries. IDC’s Internet of Things Spending Guide now includes cross-vertical video analytics use case sizing as an add-on to the main forecast analysis in the spending guide.

Despite the pandemic, IoT has evolved in the past two years, especially in Central and Eastern Europe (CEE), where organisations needed to catch up with more advanced countries in Western Europe in terms of maturity and adoption. However, due to the Russia-Ukraine War, adoption of IoT solutions in Russia will be strongly impacted, while other countries in CEE will be affected by organisations’ uncertainty and reshuffled priorities.

“During the pandemic, many organisations refocused their technology investment plans, aiming for a technology stack to support innovation, efficiency and performance, even in challenging situations — such as the Russia-Ukraine War — with IoT and automation at the core,” said Alexandra Rotaru, Research Analyst, Data and Analytics, Europe. “With organisations seeking to improve productivity, reduce costs, better orchestrate resources and assets and enhance customer experience, IoT will remain on the agenda for many technology leaders in the years to come.”

Following this research, organisations across the board are preparing for IoT readiness, albeit with some concerns in relation to cybersecurity.

However, despite such concerns, Wi-SUN Alliance recently reported that IoT security fears have fallen by over 30% in the last five years as data privacy concerns grow for companies deploying solutions.

Fears over security have become less of a concern for organisations adopting IoT solutions than it was five years ago, according to a recent study by Wi-SUN Alliance, a global member-based association of industry leading companies driving the adoption of interoperable wireless solutions for use in smart cities, smart utilities, IoT and Industrial IoT (IIoT) applications.

The Journey to IoT Maturity, a follow-up to Wi-SUN’s ‘state of the nation’ IoT study in 2017, is based on interviews with IT decision-makers from UK and US IoT adopters within key industries, including energy and utilities, state and local government, construction, technology and telecommunications. The clear signal is that IoT is now a bigger IT priority than ever for organisations across all sectors

Those respondents ranking security as one of their top three challenges when rolling out IoT fell from 58% in 2017 to 24% in 2022, while the proportion of respondents viewing it as a technical challenge also dropped from 65% in 2017 to 42% this year, indicating fewer concerns but still highlighting it as an issue. Companies might be less worried about security, but it is still on their risk list.

Phil Beecher, President and CEO, Wi-SUN Alliance, said: “Data privacy concerns have gone up, understandably, with more legislation putting the spotlight on data protection. Since our last study, stricter privacy laws have increased pressure on organisations to protect sensitive data. This includes the GDPR in Europe and various state-level laws in the US.

“Among our survey respondents, we saw that concerns were higher in the UK, where over half (53%) of organisations include secure data collection in their IoT strategies compared to just a third (34%) in the US. IoT initiatives, such as smart metering, streetlighting and those using environmental, air quality and acoustic sensors, are increasingly generating huge volumes of data and while this information may be made entirely ‘secure by design’, the risks remain.”

Industry reports suggest a growing number of attacks on IoT devices over the last two years leading to the theft of confidential data and the launch of DDoS attacks. Mirai is one of the most recognised IoT threats dating back to 2016 when it was used to compromise connected devices like routers to launch attacks on websites and networks. It is still used by malware developers to attack vulnerable systems, from manufacturing systems to critical infrastructure.

Beecher added: “While obstacles remain, organisations will need to continue to overcome both technical and non-technical challenges with the support of the industry, including IoT solutions and device companies. With more than 90% of our respondents recognising that they must invest in IoT over the next 12 months to remain competitive, failure to navigate these important issues is not an option.”